“How did he come up with that?” The Key to Creativity

Recently I was building a sales pitch for a corporate client where one of the important concepts was “Visibility is critical to your business.” The team brainstormed a bit on how to convince audiences of this idea through a powerful illustration. It was fun, and we came up with various possible analogies involving magnifying glasses or foggy days or driving at night without headlights…But we still didn’t feel as though we had quite nailed it.

The next day one of the team members sent this visual around – a glass toaster. 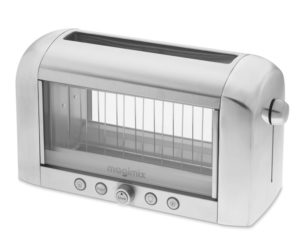 You can see the bread as it toasts.

It was a perfect metaphor. I said, “It’s brilliant! How did you come up with this!?” He told me it struck him while he was getting his morning bagel at a local bakery. He went home and Googled the idea. Bingo. (Turns out Williams Sonoma sells these for $249.95.)

His story of how he got the idea struck me, as it tied nicely to something everyone has experienced at some point:

Have you ever seen a presenter do something really cool or fun or engaging – used a great image to land a big point, or demonstrated something that really stuck with you, or even just verbally connected two points in a cool way, and you think – “I never would have thought of that”?

When we see somebody do that, part of us says “they must have a super creative brain.”

And, if you’re like me, in the NON-super creative brain category, you probably had the same thought as me – “Man, I wish I could come up with stuff like that, but I know I never will!”

Well, it turns out we are both right, and wrong.

Some people DO have super creative brains. Studies have now proven there is a wide spectrum of creativity, and some people are just naturally more creative than others. There’s a neurochemical basis for this: when they analyze the brains of creative people in studies, they find a common factor – creative people have higher levels of dopamine.

Now, if you know dopamine, you probably think of the studies where scientists get a rat to push a lever to get a dose of dopamine to the brain…and the rat will obsessively push the lever – to the point of ignoring food and sleep – until it dies.

No surprise – dopamine is connected to feelings of pleasure and reward.

But dopamine has now been linked to another factor – the ability to ignore “irrelevant” information. I have written before about the fact that the brain is wired, in most people, to filter out anything that is constant, unchanging. Our brain registers some stimulus initially, determines it is not critical, and not changing, and stops paying any attention to it.

But if the stimulus is changing, that drives our brain to be more alert to it.

Now how does this relate to dopamine and creativity?

It turns out that the higher levels of dopamine mean our brain is less quick to ignore information it would usually decide is irrelevant. In a sense, creative people are being forced, by their brain, to pay attention to more of what is going on around them, and to try to make some sense of that information.

The downside is that this can be overwhelming (in fact, very high levels of dopamine have been linked to some mental disorders). But the upside is that these persons have more bits and pieces bouncing around in their skull, which improves the likelihood that they will create a connection between two seemingly unrelated items.

And while not every connection qualifies as brilliant, some are, or at least seem so to people like me.

But I like to impress as well, so I’ve found a trick…knowing I am not about to inject myself with Dopamine, I take a different angle, but one that I find is surprisingly effective. When I am struggling to have a creative thought, trying solve a thorny problem, or just need to force my brain out of its lazy habit of ignoring the unchanging, I get out.

I am sure you have been told to get out and explore, see the world, that fresh air is healthy, that any movement is exercise – and that is all correct. But there is an added benefit to getting out, especially when you are working on that important communication you need to get right, and you want that creative idea to make your message memorable and punchy.

Your office is probably 4 unchanging walls. If you have any need to think outside the box, first you have to get out of the box.