The Hidden Genius of PuppyMonkeyBaby… Or, Why Entertainment Doesn’t Equal Effectiveness 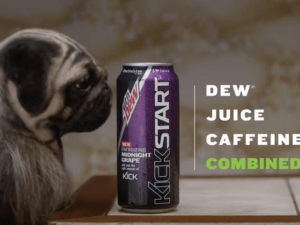 Here’s why I ask: Even though Super Bowl 50 is behind us, somehow #PuppyMonkeyBaby – Mountain Dew’s contribution to this year’s Super Bowl advertising – lives on. Love it or hate it (and most people hated it), it was by far the most talked-about commercial that aired.

In case you missed it, the spot for Mtn Dew Kickstart starts with three guys who seem destined to spend the evening lounging on their couch. Enter the PuppyMonkeyBaby, pug-faced, monkey-armed and -tailed, and baby diapered-bottomed.

In addition to an icy bucket of Mtn Dew Kickstart, the PuppyMonkeyBaby also comes bearing a rattle, and a “PuppyMonkeyBaby” chant. After a few sips from the cans and gag-inducing PubbyMonkeBaby licks to the face, the guys are on their feet, salsa-dancing their way out of their apartment and into the night.

Yes, undeniably weird. And no, most people didn’t like it. In fact, most people seemed to respond with a mixture of bewilderment and disgust. “What was that?”

But was it effective?

The lesson for presenters: Everything you say, show, or do will raise a question in the audience’s mind. Make sure you don’t just answer those questions, but you answer them in ways that add or reinforce your overall message.

The result? Even weeks later, when people are talking about the ad (and they still are), they say “puppymonkeybaby” in the same order the ad uses – a very good sign that the language stuck.

The lesson for presenters: The texture and rhythm of language is key to stickiness and memorability, as is repetition. Work to find the simplest, strongest language for your main points and repeat, repeat, repeat.

If you didn’t like the ad, or didn’t find it funny, etc. then the ad likely wasn’t aimed at you. Even though Mountain Dew spent an unholy amount to air an ad to the largest television audience of the year, they focused on a fairly small slice of that audience – the young men who look and act like those on the couch at the beginning of the spot. They were even willing to risk alienating the majority of the viewing audience to do it.

(And of course they realized an alienated audience would talk about the ad, which would create “buzz.” That buzz got them media coverage and attention far beyond what they paid for… and the distaste from the masses likely only reinforced their target audience’s affinity even more.”)

The lesson for presenters: While we’d never recommend alienating audiences, be willing to focus your message tightly to reach those you need to reach. Even if the audience is large and diverse, design your communication for the people you most need and want to reach. You’re much more likely to get them to act as a result.

The overall lesson here is important, for both audiences and presenters alike: effectiveness, not (just) entertainment, is the most important goal for any communication. Does being entertaining help? Yes, of course – it can often be the spoonful of sugar that helps the medicine of your message go down. But it’s not required.

What is required: understanding your audience thoroughly, and designing your message around what they need to act.